From Brajdiscovery
(Redirected from Radhika)
Jump to: navigation, search 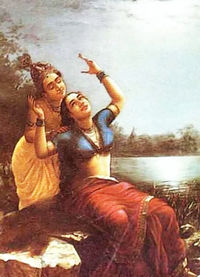 Lord Krishna’s famous friend and devotee, Radha, was herdsman Vrashbhanu’s daughter. Radha and Lord Krishna are symbol of eternal love. Radha is known as Lord Krishna’s lover and at some places as his wife. Radha was Vrashbhan’s daughter. Padma Purana mentions her to be the daughter of King Vrashbhanu. He found her while cleaning the “Yagya Bhoomi” (place of worship) and he raised her as his daughter. Another tale is that when Lord Vishnu incarnated as Lord Krishna, he asked his family of deities to descent on Earth with him. So Lakshmi, Lord Vishnu’s wife, came to Earth as Radha. According to Brahma Vaivarta Purana, Radha was a friend of Lord Krishna and was married to a man named Raapaan or Raayaan. Other references are of the opinion that Radha and Lord Krishna were married. It is also said that Radha became an adult at the time of her birth itself. Radha has always been important in Braj. There are many references found about Radha. Raapaan (Raayaan or Ayanghsh) was Radha’s husband. According to some, Radha is the worshipper of Lord Krishna. She was born in the village Raawal near Yamuna. It even has a temple of her. Radha Rani’s world famous temple is situated on the hill of village Barsana. And, its “Lathmaar Holi” is world famous as well.

Radha and Krishna: Union of Individual Soul with God

Vishnu or Krishna is Brahmn or Sat-chit-ananda, both the efficient and material cause of the world. Though He manifests himself differently to different kinds of seekers, a bhakta alone can enjoy the bliss or love of a personal God. This all-consuming love is at the heart of Chaitanya Vaishnavism and the basis of gopi-bhav in the ashtapadis of Jayadeva. Bhakti is an ardent desire to merge with the Self, which could only be captured in the mood of the gopis and Radha towards Krishna in Gaudiya tradition—devotion filled with loving attachment. Using amorous desire as a metaphor for the longing and union with the Self, Jayadeva's subtle imagery suggests that gopis have transcended their body consciousness in their desire to be one with Krishna, in their mood to experience the mahabhava or prema which brooks no separation and reunion of Radha with Krishna is nuanced in every emotion, as if to freeze the character of Radha in time, to sketch he as the perfect epitome of this mahabhava. Longing for union, the mahabhava of Radha towards Krishna through the eyes and soul of Radha is the highest form of bhakti. This vision was captured by Surdas, Meera, Keshav Das, Rahim, Raskhan, Kumbhan Das and innumerable other saint-poets of medieval India. An intense typical outpouring set to devotional music and dance has been at the centre of Vaishnavite tradition. That is precisely the background of Mabaraas. The same is exemplified in the immortalization of the gopi-bhav in Jayadeva's Geet-Govinda that reflects the deep spiritual state of longing of the individual soul, visualized as the intense love of gopis for Krishna. Earlier, Jiv Goswami, one of the six great acharyas of Gaudiya Vaishnavism, formalized the divine fervour of Chaitanya Mahaprabhu into the theological concept of achintya bhedabheda. The simple, direct, and powerful poetry of Jayadeva established that to love God as one's lover is the highest form of bhakti. The Geet-Govind can be seen as an early forerunner of the Chaitanya form of devotion and the concept of achintya bhedabheda of inconceivable oneness and difference.