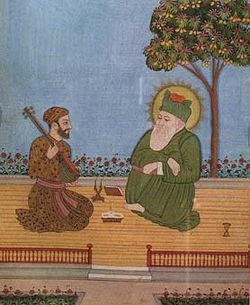 Amir Khusro (Amir khusrau, Amir khusrow (1253-1325 CE) was an Indian musician, scholar and great poet of Persian, Urdu and Braj Bhasha. He was an iconic figure in the cultural history in Indiana. A Sufi mystic and a spiritual disciple of Nizamuddin Auliya of Delhi, Amir Khusro was not only a notable poet but also a prolific and seminal musician. He wrote poetry primarily in Persian, but also in Hindavi (Brajbhasha and simple Hindi).

He is regarded as the father of qawwali (the devotional music of the Indian Sufis). He is also credited with enriching Hindustani classical music by introducing Persian and Arabic elements in it, and was the originator of the khayal and tarana styles of music. The invention of the tabla is also traditionally attributed to Amir Khusro. Amir Khusrau used only 11 metrical schemes with 35 distinct divisions. He has written Ghazal, Masnavi, Qata, Rubai, Do-Beti and Tarkibhand.

A musician and a scholar, Amir Khusro was as prolific in tender lyrics as in highly involved prose and could easily emulate all styles of Persian poetry which had developed in medieval Persia, from Khaqani’s forceful qasidas to Nizami’s khamsa. His contribution to the development of the ghazal, hitherto little used in India, is particularly significant. He was born in Patiali near Etah in northern India. His father, Amir Sayf ud-Din Mahmud, was a Turkic officer and a member of the Lachin tribe of Transoxania, themselves belonging to the Kara-Khitais. His mother was the daughter of Rawat Arz, the famous war minister of Balban, a king of the Mamluk dynasty (Slave dynasty) (1246-87) who belonged to the Rajput tribes of Uttar Pradesh. Khusro was a prolific classical poet associated with the royal courts of more than seven rulers of the Delhi Sultanate. Amir Khusro is credited with fashioning the tabla as a split version of the traditional Indian drum, the pakhawaj (mridand or mridangum). Popular lore also credits him with inventing the sitar.