Barsana is the pastime place of Shri Krishna's beloved Radhika. Lying at the heart of this village is a multitude of the Divine Couple's sweet and secret amorous pastimes, together with Their transcendental moods and desires. The Vaishnava community reveres Barsana. This venerable land with its lakes, ponds, gardens and forests — such as Gahvaravan, Sankari-khor and other pastime places — reminds one of Radha and Krishna's different pastimes. In Braj, the grass, small shrubs, creepers, trees, animals, birds, insects, snakes and so forth are all composed of Sachidanand; or eternality, spiritual consciousness and full transcendental bliss. They assist Radha and Krishna in their pastimes, and are very dear to them. It is said in the scriptures that even eminent realised souls, like Brahma and Shankar, repeatedly pray to attain a birth like theirs so that they too may be able to serve Radha and Krishna.
"All the grass, shrubs, insects and other creatures found in Braj are very dear to Him, who is the very embodiment of all transcendental bliss, Shri Mukund, and they assist in His pastimes. All the scriptures have repeatedly established this fact, and devotees ranging from Brahma to Uddhav have expressed a desire to take birth in Braj amongst these species. For these reasons, I worship all the creatures who reside in Braj."

Barsana's original name is Vrisabhanupura. Vrisabhanu Maharaja, the father of Radhika, lived here with his family. Barsana is situated fourteen miles west of Govardhan and six miles east of Kamyavan According to the Varah and Padma Puranas, Brahma pleased Shri Hari at the end of Satya Yug by performing arduous worship. Brahma then asked for the following boon: "Please perform Your sweet pastimes with the Braj-gopis on my very form and allow me to behold these lilas. Please make my life blessed, by especially performing swing pastimes in the rainy season and by performing Holi in spring."
Pleased with Brahma, Shri Hari instructed him, "Go to Brsabhanupura and take the form of a hill there. In that form you will be able to behold all Our sweet pastimes." And so it happened that Brahma assumed the form of a hill at this place in Braj and fulfilled his cherished desire.

Pastime Places in the Area of Barsana 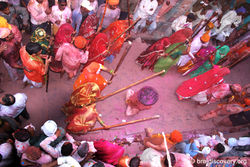 
Also on top of Brahma-parvat are Dana Mandir, the place of a swing (hindola), Mayur-kuti, a ras-mandal and a temple of Radha. Further on between the two hills is Sankari Khor. Near Shankari-khor is Vilas Mandir, and next to Vilas Mandir is Gahvaravan. Within Gahvaravan are Radha-sarovar and a ras-mandal, and nearby is Dohani Kund. Very close to this kund is Mayur-sarovar, which was constructed by Chitralekha." Bhanu-sarovar is also nearby, and on its bank is Brajesvara, a deity of Maharudra. On its left side is Kirti-sarovar.
There are four sarovaras, or ponds, around Barsana:

Shankari-khor lies north of Chiksauli, and on Vishnu-parvat, east of Shankari-khor, is Vilas Garh. This is the location of a ras-mandal. Near Vilas Mandir is where Radhika, as a child, played with the sand, building palaces and so on. West of Shankari-khor, on top of the mountain, is Dana Garh; and south-west of Shankari-khor and west of the village of Chiksauli are Gahvaravana and Gahvara-kund. Mayur-kuti is to the right when entering Gahvaravana. On the top of the hill, south-west of Gahvaravana, are Mana-garh and Mana Mandir; and below and nearby is the village of Manapura. North of Mana-garh is the temple of the Maharaja of Jaipur, and north of that temple is Shriji Temple. Just below Shrijl Temple, still on the hill, one comes to the temple of Brahmaji and the palace of Radhika's paternal grandfather, Mahibhanu. Below that lies the village of Barsana. West of Barsana is Mukta Kund, or Ratna-kund. Among the places listed above, we will describe those where prominent pastimes took place.

After seeing Radhika here, Krishna's eyes brimmed with tears. The word dabhararo means "full of tears", and this village therefore became known by that name. Dabhararo is situated two miles south of Barsana.

One-and-a-half miles south-west of Dabhararo is Rasoli, where Radha and Krishna performed the famous Ras along with the gopis. This is the birthplace of Tungavidya Sakhi. Tungavidya's father is Puskar Gopa, her mother is Medha Gopi, and her husband is Valisa. She is one of the main eight sakhis, and is fully expert in dancing, singing, playing instrumental music, astrology, writing poetry, cooking and various other arts. Tungavidya Sakhi is also skilled in understanding the language of birds and animals, and in arranging for Radha and Krishna's meeting.

Surrounding this pond are pilu trees that produce fruits in abundance. On the pretext of collecting pilu fruits, Radhika would come here to perform varieties of playful pastimes. Shri Krishna would also come here from Nand gaon and enact many pastimes with Her. Once, the unmarried daughter of Kirtida, Radhika, and Her sakhis went to Nand Gaon to see Yashoda-maiya. Charmed by Radhika's beauty and qualities, Yashoda-maiya desired in her heart to marry Radhika to her son Krishna and thus have Her as her daughter-in-law. So great was her desire that she painted Kishori Radha's hands yellow. Radhika's heart became very happy but, as She returned to Her father's house in Barsana, She became quite embarrassed. She washed and scrubbed Her hands in this pond, and the pond's water turned yellow. This pond is therefore called Piri-pokhar or Pili-pokhar, "the yellow pond". It is also called Piyala-kund because piyala trees surround it.

Near Bhanu Sarovar is the deity of devadidev Mahadev (Shiva), which was installed by Vrishabhanu Baba and the other gopas to fulfil their desires. The Vrajvasis worship him for their welfare. According to hearsay, some Vrajavasis once desired to remove this deity from here and take him to a better place. As they dug, the deity of Mahadev increased in depth, and they were unable to reach the deity's base. In the end, they gave up the idea of removing this deity, understanding that this was the appropriate place for him, and begged Mahadev for forgiveness.