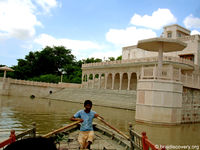 This place lies approximately one mile east of Nand-bhavan, the birthplace of Krishna.

Here, the small boy Krishna at earth while playing with the cowherd boys. The boys saw this and told Mother Yashoda, who asked Balram about it. Balram verified the fact. She went to Krishna and asked Him herself, "Have You eaten clay?" He replied, "No, Maiya, I did not eat clay." "All right, Kanhaiya, open Your mouth and show me." "You can see, Maiya," He said as He opened His mouth. Looking into Kanhaiya's mouth, Maiya became dumbstruck. There, she saw innumerable universes, countless Brahmas, Vishnus and Maheshas (Shiva), and all moving and non-moving entities. She closed her eyes in fear and thought, "What is this that I am seeing? Is it an illusion or someone's magical powers?" Upon opening her eyes, Mother Yashoda saw that Kanhaiya was sitting on her lap. She returned to the house and called the brahmanas, who recited blessings to pacify the wrath of the demigods. She also donated cows and other valuables to the brahmanas. Although Yashoda-maiya had directly witnessed Krishna's quality of being Bhagvan in the form of seeing countless universes and all animate and inanimate objects situated within His mouth, she never accepted Krishna as the Supreme Lord. Her vatsalya-prem, or motherly love, for Him blossomed rather than weakened. By contrast, when Devki and Vasudev beheld Krishna's four-armed form, their vatsalya-prem weakened. Similarly, Arjuna's sakhya-bhav (mood of friendship) also weakened when he saw Krishna's universal form. Devki, Vasudev and Arjuna folded their hands and began to glorify Krishna and pray to Him. In Braj, however, the prem of the Brajvasis does not weaken even when Krishna manifests Himself as the Supreme Lord. Their sweet mood towards Shri Krishna never diminishes because they never accept Him as Bhagvan. 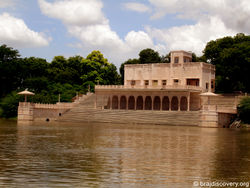 Another time, the small boy Krishna was playing here with His companions, the cowherd boys, when the boys unexpectedly began to tease Him and laugh and clap. At first, Kanhaiya could not understand why, but quite soon He did. Dham, Shridham, Madhumangal and the other cowherd boys were saying, "Nand Baba is fair-complexioned and Yashoda-maiya is fair-complexioned, but You are black. Why? The fact is that You were not born from Yashoda-maiya's womb. Someone else gave birth to You, but being unable to bring You up, they put You in the hollow of a banyan tree. The supremely merciful Nand Baba found You there crying helplessly. He picked You up and placed You in the lap of Mother Yashoda, but, in reality, You are not the son of Nand and Yashoda." Kanhaiya stopped playing and went home weeping. He began to roll around the courtyard, crying. Mother Yashoda affectionately picked Him up in her arms and tried to find out why He was crying. But today Kanhaiya refused to sit in her lap. She forcibly took Him in her arms, brushed the dust from His limbs, and asked Him what had happened. After Kanhaiya calmed down a little, He said, "Dham, Shridham and the other cowherd boys are saying, `You were not born from Maiya's womb. Baba is fair-complexioned and Maiya is fair-complexioned, so where did You, who are black, come from?'" Hearing this, Maiya started laughing and said, "O my lala, who else is saying this?" "Dau Bhaiya." Maiya, put her hand on Krishna's forehead and said, "I take an oath before Shri Narayan that You are my son born from my womb. I will chastise those children." She then began to breast-feed Krishna. In reality, Nand Baba was of a fair complexion, but Mother Yashoda, who was a very beautiful gopi, was slightly dark in hue. How else could Krishna have been so beautiful if He had not been born from Mother Yashoda's womb? But because Kanhaiya was somewhat darker than His mother, the boys teased Him about it. This place, which treasures this pastime, can still be seen today.