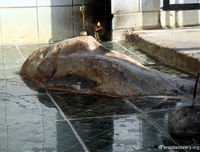 After Shri Krishna entered the cave known as Luk Luka Khandar, He appeared on top of the hill in which the cave is buried and played sweetly on His flute. The sound of the flute broke the sakhis meditation on Him. They looked up to see their beloved playing His flute on the hill, and eagerly ran there to meet Him. The sound of the flute somewhat melted the hill, and Shri Krishna's footprints manifested there. Even today, one can see these footprints very clearly. The stones on the nearby hill where the sakhas were playing and the calves were grazing also melted, leaving impressions of their feet and hooves, which are still clearly visible today, even after 5,000 years.