Mahavan and Gokul are in fact one and the same place. Nand Baba along with his family members journeyed from Nand Gaon to Brhadvan, or Mahavan, where they settled down. Mahavan is called Gokul because go (cows), gopas, gopis and so forth resided here. At the time of Nand Baba, Gokul was not a separate village or town. In fact, the current village of Gokul is a recent settlement. Nand Baba's cowshed was in Gokul. About five hundred years ago, after Shri Chaitanya Mahaprabhu's arrival in Braj, Shri Vallabhacharya sat on this beautiful bank beside the Yamuna and read Shrimad Bhagavata from beginning to end. Shri Vallabhacharya's son, Shri Vitthalacharya, and his son, Shri Gokulnath, also have sitting-places (baithakas) here. In fact, Shri Vitthalacharya tricked Aurangzeb and leased this place in his own name. It was actually he who founded Gokul. After them, the son of Shri Gokulnath resided here together with his family members. The goswamis of the dynasty of Shri Vallabha only lived in Gokul, where they established the deities of Mathuresa, Vitthalnath, Dvarkadhish, Gokul-Chandrama, Bal-Krishna and Shri Madan-mohan. Later, Shri Mathuresa went to Kota, Shri Vitthalnath to Nathadvara, Shri Dvarkadhish to Kankrauli, Gokul-chandrama to Kamyavan, Shri Bal-Krishna to Surata and Madan-mohan to Kamyavan. Since the goswamis in the dynasty of Shri Vallabha reside in Gokul, they are well-known as the Gokul goswamis.

This is the main ghat in Gokul and the place where Shri Vallabhacharya received darshan of Shri Yamuna Maharani. He began to give initiation (diksa) at this place. This Ghat is thus a place of great significance to the Vaishnavas of the Vallabha Sampradaya. 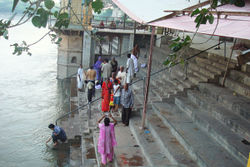 When Shri Vallabhacharya came to Braj, he visited this Ghat at the Yamuna, finding it extremely attractive. He heard from the respectable elderly Vrajavasis about Nand Baba's cowshed nearby. They informed him that the Ghat where he was sitting was well known by the name of Govind-Ghat. Shri Vallabhacharya became so delighted that he performed a Bhagavata-saptah (recitation of the Shrimad Bhagavata for seven days) under the sami tree here.
Other places of darshan in Gokul as follows:

In the village of Naurangabad, which lies across the Yamuna facing Gokul, are the temple of Shri Gangaji and other places of darshan.