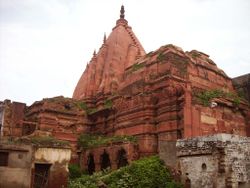 During the oppression of Aurangzeb, the original deities of Gopinathji, Radhika and Jahnava also proceeded to Jaipur together with other deities. The Pratibhu Vigrahas now preside in the temple built by Nand Kumar Vasu. Jahnava Thakurani is seated on the left side of Gopinath, and Lalita Sakhi and a small deity of Radhika are seated on His right. The deity of Mahaprabhu Shri Gaurasundara is in a separate chamber. In 1632 AD, the original temple was built by Ray Singh, the son of the king of Bikaner, Maharaja Kalyanamala of the Rathaur dynasty. Aurangzeb destroyed this temple. The Pratibhu Vigrahas were established in 1748 AD, and the new temple was built in 1819 AD. Near the new temple to the east is the samadhi of Madhu Pandita. Close to the famous Vanshivat, on the bank of the Yamuna, Shri Paramanand Bhattacharya and Madhu Pandita used to worship Shri Radha-Krishna Yugala with extreme renunciation.

Once, the current of the Yamuna cut into her bank and a very beautiful deity of Shri Gopinath was revealed from under the sand. In the morning, when the devotee Paramananda came to the Yamuna to bathe, he found this exceptional deity who stole his heart. He entrusted the service of Shri Gopinath to Shri Madhu Pandita. First, Shri Gopinath resided near Vanshivat, but later on a magnificent new temple was constructed elsewhere and His service and worship continued there.

Once, Nityananda Prabhu's wife Jahnava Thakurani came to Vrindavan. As she was having darshan of Shri Radha-Gopinath, she thought that the deity of Radhika was too small and that, if Radhika had been a little taller, the Couple would look much more beautiful. Jahnava Thakurani returned to her residence after beholding the evening ceremony. That night, in a dream, Shri Gopinath asked Jahnava to arrange for a taller deity of Radhika. She received similar instructions from Radhika, and had a deity of Her made that was a more appropriate size for the deity of Gopinath. The book Bhakta Mal describes that at the time of Jahnava Thakurani's disappearance, she revealed her own deity and established herself in it. She instructed the priests to install the deity of her in the chamber of Shri Gopinath. When this deity arrived at the temple of Gopinath in Vrindavan, the priests hesitated to install her along side Shri Gopinath. At that time, Gopinathji Himself instructed the priests, "Do not hesitate. This is My beloved Ananga Manjari. Place her on My left and Radhika on My right." And so it came to be that Jahnava stands on Shri Gopinath's left side and Radhika stands on His right.