This place lies a little east of Chir Ghat on the bank of the Yamuna. Krishna killed the Keshi demon here. 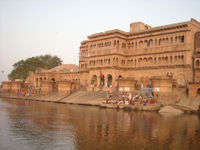 Once, Krishna and His sakhas were grazing the cows at this place. Madhumangal joked with Him, "My dear friend, if You give me Your peacock feather, sweet flute and yellow garments, then all the gopas and gopis will love me and feed me delicious laddus. Nobody will even ask You if You would like some." Smiling, Krishna personally dressed Madhumangal up in His peacock feather and yellow garments and handed him His flute and staff. Now all dressed up, Madhumangal began to strut about here and there. At this time, the very powerful Keshi demon assumed the form of a huge horse. Neighing and whinnying, he appeared there to kill Krishna. Maharaja Kansa had instructed him, "Whomever you see wearing a peacock feather on his head and yellow garments on his limbs, and holding a flute in his hand, know that person to be Krishna for certain and kill Him." Upon seeing Madhumangal dressed as Krishna, Keshi attacked him with his two hind legs. Krishna quickly came to save Madhumangal and killed the Keshi demon. Although the demon's legs did not so much as touch Madhumangal, he lost consciousness just by the breeze created by the movement of Keshi's legs. After Krishna killed Keshi, however, Madhumangal became embarrassed. He went to Krishna and handed back His flute, peacock feather and yellow cloth. He told Him, "I do not want any laddus. My life is worth hundreds of thousands of laddus." The cowherd boys began to laugh.
Even today, the memory of this pastime will enter our hearts by visiting Keshi Ghat.