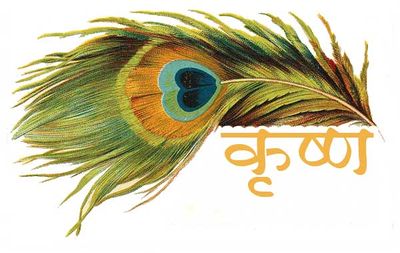 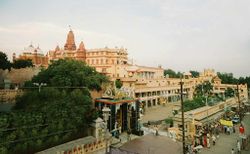 Around 5,200 years ago, at the end of the last Dvapar Yug, the Supreme Lord Shri Krishna appeared as the son of Shri Vasudev and Devki in the prison house of the brutal King Kansa. Seeing the child's divine and wondrous four-armed form, the colour of a dark rain cloud, Vasudev and Devki began glorifying Him. In His four hands He held a conch shell, a disc, a club and a lotus flower; on His chest was the mark of Shrivatsa; and the Kaustubha jewel hung round His neck. In response to Vasudev and Devki's prayers, the Supreme Lord assumed the form of a newborn baby boy, and somehow urged Vasudev to take Him in his arms and carry Him to Nand Bhavan, the home of Nand Maharaja, in Gokul-Mahavan. So that Vasudev could escape with the divine baby, his hand cuffs and foot-shackles fell open, the guards fell into a deep sleep, and the great iron doors of the prison swung open of their own accord. Although the night was stormy and the Yamuna was filled with roaring waves, the way cleared before Vasudev and he safely reached Gokul. That night, in Nand bhavan, Yashoda had given birth to two-armed Shyam sundar, and a few moments later to a baby girl, Yogmaya. Because of her heavy labour, Yashoda had fallen unconscious. When Vasudev entered the house with his baby, that two-armed Shyamasundar(krishna) assimilated Vasudev's son within Himself, but Vasudev could not understand what had happened. He picked up the baby girl in his arms and silently returned to Kansa's prison. The prison doors closed automatically behind him, and his and Devki's shackles slipped back in place. When Kansa received word that a child had been born to Vasudev and Devki, he stormed into the prison, sword in hand, and snatched the baby girl from the arms of his sister, Devki. Swinging the baby by the legs he tried to dash her against the surface of a stone, but she rose into the sky and turned into the eight-armed goddess Durga. After rebuking Kans she disappeared. 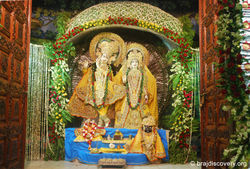 Shri Vajranabha, Shri Krishna's great-grandson, established an extensive temple at Shri Krishna's birthplace. Over the centuries, religious kings of India successively built temples at the same location. When Shri Chaitanya Mahaprabhu arrived in Braj there was a grand temple here. Seeing Mahaprabhu's sweet dancing born from transcendental ecstatic love, and hearing His sweet kirtana, hundreds of thousands of people assembled here, and became overwhelmed with ecstasy. When Shri Chaitanya Mahaprabhu came to this place, He saved Subuddhi Raya, a king of Bengal, by stopping him from committing suicide. He then made him into a great devotee of the Lord. Subuddhi Raya had been ostracised from his caste by an extremist Muslim ruler in Bengal. Though Subuddhi Raya wanted to become a Hindu again, the dogma of the priestly castes decreed that there was no path by which he could re-enter Hinduism before his death. When Shri Chaitanya Mahaprabhu, the ocean of mercy, met Subuddhi Raya, He asked him to utter the holy name of Shri Krishna just once in order to become completely purified. Subuddhi Raya followed Mahaprabhu's instruction, and performed harinam sankirtana and served the Vaishnavas at this place for the rest of his days. 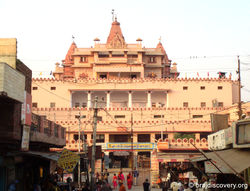 Mahaprabhu arrived in Braj during the rule of the Mughal emperor Humayun. The Muslims later destroyed the temple that was here at that time. In AD 1610, the king of Orcha, Maharaja Virasinghdev, constructed a grand temple for Adikeshav at the cost of thirty-three hundred thousand rupees, but in AD 1669 the intolerant and fanatic ruler Aurangzeb destroyed it, and built a mosque in its place. The priests of Shri Adikeshav hid the ancient deity in Rajadhana, a village seventeen miles from the present city of Itava, in the district of Kanpur. Today, this same deity resides in a small temple in Rajadhana, and a pratibhu-vigraha continues to be worshipped in the Adikeshav Temple in Mallapura, behind the present Janma-sthan. This Adikeshav deity is unique in that His body is decorated with the symbols of the twenty-four incarnations of Bhagvan. Vaishnavas visit this temple because they consider this the deity of Shri Adikeshav. A magnificent temple has now been constructed at the birth-place of Shri Krishna at Katra Keshav Dev, with funds raised by Shri Madan Mohan Malviya. He did this on the direction of the late Hanuman Prasad Poddara of Oita Press in Gorakhapur, and with the contribution of Shri Dalmiya and other wealthy persons. The birthplace of Shri Krishna is within the Mallapura area of Mathura. Chanura and the other wrestlers (mallas) of Maharaja Kansa lived here. There is a wide pond near here named Potra Kund, which was originally within the walls of Kansa's gigantic prison. Shri Vasudev and Devki would bathe here, and it is said that Devki's clothes were washed here after the delivery of her sons. The pond was formerly called Pavitra Kunda (pavitra meaning "pure"), but in the course of time, it became known as Potra Kund.