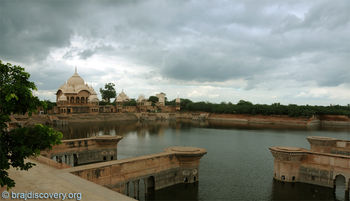 About 2 kilometers from Govardhan near Radha-kund, a magnificent architecural group was erected by Jawahar Singh in honour of his father Suraj Mal (1707-1763). An earthen pond till 1675, it was constructed properly by the ruler of Orcha, Veer Singh, after which Suraj Mal gave it the form of a garden for his queen Kishori making it an attractive and spectacular place. Afterwards, Jawahar Singh considered it as a memento of his parents. The principle tomb is 57 sq-feet in area. The best part of the design is the plinth, which is at once bold in outline and delicate in finish.The Raja's monument is flanked on either sides by one of somewhat less dimensions, commemorating of his two queens, Hansiyat and Kishori. The lofty terrace upon which they stand is 460 feet in length, with a long shallow pavillion serving as a screen at each end, and nine two-stories kiosks of varying outline to relieve the front. Attached to Rani Hansiya's monument is a smaller one in commemoration of a faithful attendant. Behind is an extensive garden, and in front, at the foot of the terrace, is an artificial lake, called the Kusum-Sarovar, 460feet square; the flights of stone steps on each side being broken into one central and four smaller side compartments by panelled and arcaded walls running out 60 feet into the water. On the north side, some progress had been made in the erectio of a chattri for Jawahar Singh, when the work was interrupted by Muhammadan inroad and never renewed. On the same side, the ghats of the lake are partly in ruins , and it is said were reduced to this condition, a very few years after their completion, by the Gosain Himmat Bahadur, who carried away the materials to Brinda-ban, to be used in the construction of a ghat which still commemorates his name there. Kusum Sarovar is an attractive place which lies on the sacrd circular path (parikrama) of Govardhan and is under government protection. Improper maintenance is leading to the structure losing its beauty.

Kusuma-sarovara is on the right of the parikrama path, about one-and-a-half miles south-west of Radha-Kunda. A forest of flowers (kusuma) was here full of varieties of trees, creepers and flowers like bell, cameli, juhi, yuthi, mallika and campaka.  Radhika ji used to come here on the pretext of picking flowers with her sakhis, but Her real intent was to meet rasika Shri Krishna, with whom She would have love-quarrels and sarcastic exchanges full of rasa.
Krishna-bhavanamrta describes how one day Radhika ji was picking flowers here with her sakhis when Krishna arrived, and the following exchange took place:
Krishna: Who is there?
Radha: Nobody.
Krishna: Tell Me honestly, who are You?
Radha: Nobody.
Krishna: You are speaking in a very crooked way.
Radha: And You speak in a very straight way, don't You? Krishna: I am asking You who You are.
Radha: Don't You know?
Krishna: What are You doing?
Radha: Picking flowers to worship the Sungod.
Krishna: Have You received permission from anyone to do so? Radha: There is no need of anyone's permission.
Krishna: Aha, I have caught a thief today. I wondered who was stealing flowers every day and ruining this garden. Now I have caught You, and will punish You straight away.
Radha: Since when have You become the master of this flower garden? Have You ever planted a single flower here Have You ever even watered one? On the contrary, You ruin this flower garden with Your hundreds and thousands of cows and Your boisterous, brazen friends. Indeed, since when have You become the protector of this garden?
Krishna: Do not defame a pious, righteous person like Me. Now I shall teach You a good lesson.
Radha (smiling): Aha-ha, You are a highly pious and righteous person, are You? You killed a woman right after Your birth; You lied to Your mother even in childhood; You stole butter from the houses of the neighbouring gopis; and when You became a little older, You stole the clothes of the young gopis. Only a few days ago You killed a calf. This is the extent of Your pious, saintly conduct.
Hearing the retort, Krishna scratched His head and looked towards clever Madhumarigala, who advised Him, "One's wellbeing lies in remaining quiet." At this point, all the sakhis surrounded Shyamasundara and began to clap .