Maharaja Vajranabh installed the three deities of Shri Govind Dev, Shri Gopinath and Shri Madan Mohan in Shri Dham Vrindavan.In time, due to the oppression of the barbarians, the priests hid these deities in various places and fled. Vrindavan turned into a dense forest.

Sometimes in the morning, Shri Sanatan Goswami walked the sixteen miles from Vrindavan to Govardhan to perform the fourteen-mile long parikrama of Govardhan. From there, he would walk another sixteen miles to Mathura to collect alms (madhukari) and then again walk back to his bhajana-kuti in Vrindavan.

One day, he came to the house of a Chaube brahmana in Mathura for alms. What did he see there? In the house of the Chaube, two beautiful boys were playing the game gulli-danda. Madan, the restless, fidgety boy with a dark-bluish complexion defeated the son of the Chaube. Madan climbed upon the shoulders of the defeated boy and enjoyed a `horse ride'. But when the Chaube's son defeated Madan the second time they played, and it was his turn to enjoy a ride on Madan's shoulders, Madan ran into the temple room. Seeing this, the son of the Chaube angrily abused and pursued Him. He wanted to enter the temple, but the priest scolded him and chased him away. Pointing his forefinger at Madan, who had turned into the deity, the son of the Chaube said, "You just wait, I will see You tomorrow."
This scene amazed Shri Sanatan Goswami. The next day, he arrived a little earlier, at breakfast time, desiring to again have darshan. Although she had not yet taken bath, the Chaubain was making khichri for both boys, who were sitting waiting for their breakfast. Maiya was brushing her teeth with one end of a stick and was stirring the khichri with the other end. When she had finished cooking, she served the boys the hot khichri in bowls, cooling it down by blowing on it with her mouth. The boys were relishing this khichhri with great love.
Sanatan Goswami could not tolerate her improper conduct. "Maiya, it is not proper to cook khichri without taking bath, to stir it with the stick you use to brush your teeth, and then to serve this contaminated breakfast to the boys."
The Chaubain realized her mistake, and replied, "Baba, from tomorrow, I will be clean when I cook and serve the boys their breakfast."
Shri Sanatan Goswami wanted to see some more pastimes of the deity of Shri Madan-mohan, so on the third day he went there again. Breakfast was delayed that day because Maiya was taking bath. She then had to clean the pots. The hungry boys were demanding breakfast. Maiya pacified them, and after completing her morning chores, she started cooking khichri. The two boys were pulling on her cloth and insisting on eating at once. Sanatan Goswami was unable to tolerate this. He approached her and said,
"Maiya, there is no need for you to be clean by bathing. If this Madan is pleased with your unclean and impure breakfast, then you should do as such. I have committed an offence at your feet. From tomorrow, you should do whatever you think is proper to satisfy them." Just as Sanatan Goswami was about to leave, the boy Madan came out of the temple room and said, "Baba, I will come with you."
But Shri Sanatan Goswami replied, "I am a completely renounced person. I have neither a place to live, nor any arrangement to cook palatable food. If even Yashoda-maiya could not completely satisfy You, how can I take care of You?" The child Madan nonetheless insisted on coming with him. Sanatan Goswami said, "If You really want to come, then You will have to follow me on foot. I cannot carry You on my shoulders."
The boy said, "I will walk behind you, but do not turn around along the way to look at Me. You can look at Me only at your bhajana-kuti."
When Sanatan Goswami had reached his bhajana-kuti, he turned around and saw the boy Madan smile and change into His deity form. Sanatan Goswami constructed an altar by putting a board on top of a few stones and seated Him there. Every day, he would cook some balls of dough without salt on live coals, and offer them to the deity.
One day, as Sanatan Goswami was making his offering, Madan-mohanji asked him for some salt. Sanatan Goswami would happily have given salt if only he had some, but there was no salt in his hut. Madan-mohanji told him, "I am not able to swallow this dry dough-ball." Upon hearing this, Sanatan Goswami began to repent. 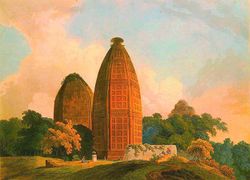 At that time, Krishnadas Kapoor, a rich merchant from the Multan province, happened to be travelling along the Yamuna carrying valuable articles for trade in large boats. As the boats approached Sanatan Goswami's bhajana-kuti, they got stuck in the sand. Despite several efforts, the boats could not be released from the sand. The merchant came ashore and saw the extremely beautiful deity of Shri Madan-mohan in front of the hut. Sitting down on the invitation of Sanatan Goswami, the merchant began to weep and lament to him about his situation. In his mind, he firmly vowed, "As soon as my boats are freed from the sand, I will construct a beautiful temple for Shri Madan-mohan with the profits I make from this journey. I will also make proper arrangements for His service and offerings." The moment he resolved this, his boats were dislodged by themselves and started drifting again. He made an enormous profit from his trade and, on the inspiration of Shri Sanatan Goswami, had a huge temple constructed for Shri Madan-mohan. However, Shri Sanatan Goswami entrusted all the arrangements of service, worship, offering and so forth to the priests and again began performing madhukari [1] in Braj. In this way, he maintained his life by living under a different tree every night and performing rigid sadhan-bhajan. After the disappearance of Shri Sanatan Goswami from this material world, Aurangzeb, who was inimical to the Hindus, desecrated this temple in 1670 AD, destroying the dome and other parts. Before he did this, Madan Mohanji and other deities of Vrindavan had already been moved to Jaipur. Nowdays, Madan-mohanji resides in Karauli. In 1748 AD, a pratibhu-vigraha of Madan-mohan was established here. Then, in 1819 AD, Shri Nandalal Vasu constructed the present temple.

The ancient hand-written books, Seva-prakatya and Istalabha, mention that Sanatan Goswami obtained Shri Madan-Gopal from Parashuram Chaube of Mahavan in samwat 1590 (1534 AD) and re-established the deity's service and worship in the same year on shukla-dvitiya (the second day of the bright moon) of Magha (January–February). He entrusted the duties of the service and worship to Krishnadas Brahmachari. At that time, there was no deity of Radhika with Shri Madan-mohan. Shri Puroshottama Gyan, the father of King Prataparudra of Orissa, arranged with great faith to send two deities of Radha from Puri-dhama to Vrindavan. Shri Madan-mohan informed the priest in his dream, "The taller of the two deities from Puri is Lalitaji, and the shorter is Radhaji. You should place the deity of Radhika on My left side and the deity of Lalita on My right side." It is mentioned in Bhakti Ratnakar that Shri Sanatan Goswami built a temple for Shri Chaitanya Mahaprabhu in the southern part of Shri Madan-mohan's temple, but Shri Chaitanya Mahaprabhu did not come to Vrindavan a second time. In the new temple, Radhika stands on Shri Madan-mohan's left side and Lalita stands on His right side. A salagrama-shila is also there, and Shri Jagannath presides in a separate room (prakostha). Places of darshan near the old temple are Shri Sanatan Goswami's bhajana-kuti, samadhi and the grantha-samadhi.