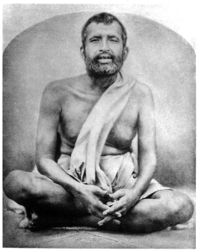 Sri Ramakrishna Paramahamsa (February 18, 1836 - August 16, 1886), born Gadadhar Chattopadhyay, is a famous mystic of nineteenth century India. His religious school of thought led to the formation of the Ramakrishna Mission by his chief disciple Swami Vivekananda—both were influential figures in the Bengali Renaissance and the Hindu renaissance during 19th and 20th century. He was considered an avatar or incarnation of God by many of his disciples, and is considered as such by many of his devotees today. Ramakrishna was born in a poor Brahmin Vaishnava family in rural Bengal. He became a priest of the Dakshineswar Kali Temple, dedicated to goddess Kali, which had the influence of the main strands of Bengali bhakti tradition. His first spiritual teacher was an ascetic woman skilled in Tantra and Vaishnava bhakti. Later an Advaita Vedantin ascetic taught him non-dual meditation, and according to Ramakrishna, he experienced Nirvikalpa Samadhi under his guidance. Ramakrishna also experimented with other religions, notably Islam and Christianity, and said that they all lead to the same God. Though conventionally uneducated, he attracted attention of the Bengali intelligentsia and middle class. He organized a group of followers, led by his chief disciple Swami Vivekananda. Ramakrishna's ideas were spread to the West by Swami Vivekananda, who attracted attention at the first Parliament of the World's Religions at Chicago in 1893. He established the Vedanta Society to spread Vedanta and Yoga in America and in India he founded the Ramakrishna Mission—a monastic society that promotes Hinduism, Vedanta, religious pluralism and carries out social service.The Ramakrishna movement has been termed as one of the revitalization movements of India. As of 2008, Ramakrishna Mission has 166 branch centers all over India and in different parts of the world and the headquarters is located at the Belur Math.