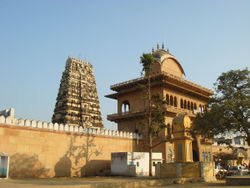 The great temple, founded by Seths Gobind Das and Radha Krishan, brothers of the famous millionaire Lakhmi Chand, is dedicated to Rang Ji, or Sri Ranga Nath, that being the special name of Vishnu most affected by Ramanuja, the founder of the Sri Sampradaya. It is built in the Madras style, in accordance with plans supplied by their guru, the great Sanskrit scholar, Swami Rangacharya, a native of that part of India.

The works were commenced in 1845 and completed in 1851, at a cost of 45 lakhs of rupees. The outer walls measure 773 feet in length by 440 in breadth, and enclose a fine tank and garden in addition to the actual temple-court. This latter has lofty gate-towers, or gopuras, covered with a profusion of coarse sculpture. In front of the god is erected a pillar, or dhvaja stambha, of copper gilt, sixty feet in height, and also sunk some twenty-four feet more below the surface of the ground. This alone cost Rs. 10,000. The principal or western entrance of the outer court is surmounted by a pavilion, ninety-three feet high, constructed in the Mathura style after the design of a native artist. In its graceful outlines and the elegance of its reticulated tracery, it presents a striking contrast to the heavy and misshapen masses of the Madras Gopura, which rises immediately in front of it. A little to one side of the entrance is a detached shed, in which the god's rath, or carriage, is kept. It is an enormous wooden tower in several stages, with monstrous effigies at the corners, and is brought out only once a year in the month of Chait during the festival of the Brahmotsav. The mela lasts for ten days, on each of which the god is taken in state from the temple along the road, a distance of 690 yards, to a garden where a pavilion has been erected for his reception. The procession is always attended with torches, music, and incense, and some military display contributed by the Raja of Bharatpur. On the day when the rath is used, the image, composed of the eight metals, is seated in the centre of the car, with attendant Brahmans standing on either side to fan it with chauris. 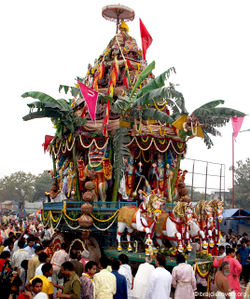 Rath Yatra, Rang Ji Temple,Vrindavan, Mathura
Each of the Seths, with the rest of the throng, gives an occasional hand to the ropes by which the ponderous machine is drawn; and by dint of much exertion, the distance is ordinarily accomplished in the space of about two and-a-half hours. On the evening of the following day there is a grand display of fire-works, to which all the European residents of the station are invited, and which attracts a large crowd of natives from the country round about. On other days when the rath is not brought out, the god has a wide choice of vehicles, being borne now on a palki, a richly gilt 'tabernacle' (punya-kothi), a throne (sinhasan), or a tree, either the kadamb, or the tree of Paradise (kalpa-vriksha); now on some demi-god, as the sun or the moon, Garura, Hanuman, or Sesha; now again on some animal, as a horse, an elephant, a lion, a swan, or the fabulous eight-footed Sarabha. The ordinary cost of one of these celebrations is about Rs. 5,000, while the annual expenses of the whole establishment amount to no less than Rs. 57,000, the largest item in that total being Rs. 30,000 for the bhog or food, which after being presented to the god is then consumed by the priests or given away in charity. Every day 500 of the Sri Vaishnava sect are fed at the temple, and every morning up to ten o'clock a dole of flour is given to anyone of any denomination who chooses to apply for it.

The endowment consists of thirty-three villages, yielding a gross income of Rs. 1,17,000, on which the Government demand amounts to Rs. 64,000. Of the thirty-three villages, thirteen, including one quarter of Brinda-ban, are in the Mathura, and twenty in the Agra district. The votive offerings amount on an average to Rs. 2,000 a year, and there is further a sum invested in the funds which yields in annual interest as much as Rs. 11,800. In 1868, the whole estate was transferred by the Swami—the deed of transfer bearing a stamp of Rs. 2,000-to a committee of management, who on his death were bound to appoint a successor. This arrangement was necessitated by the bad conduct of his son Srinivasacharya—named according to family custom after the grandfather—who, far from being a scholar like his father, is barely edu cated up to the ordinary level of his countrymen : while his profligacy is open and notorious. Immorality and priestly dignity, it is true, are not universally accounted as incompatible qualities; but the scandal in his case is augmented by the ceremonial pollution he occurs from his habit of familiar intercourse with the lowest classes of the people, while his reckless extravagance knows no bounds. Since his father's death he receives a fixed allowance for his maintenance; but another Guru has been brought up from Madras to conduct the temple services, and the estate is entirely under the control of the committee. This consists of six members, of whom the most active is Seth Narayan Das. He is also appointed general attorney for the trustees, and all the temple property, valued at about 20 lakhs, is entered in his name. Since the new arrangement, there has been no falling off in the splendour of the festivals or in the liberality with which the different charities are maintained, while at the same time the estate has been improved and the cost of establishment reduced. Of the villages that form the endowment, three in Mahaban and two in Jalesar were conferred on the temple by Raja Man Singh of Jaipur. Though the lawful heir to the throne, he never took his seat upon it. He was the posthumous son of Raja Prithi Sinh, on whose death, in 1779 A. D, the surviv ing brother, Pratap Sinh, claimed the succession. The nephew's right was sub sequently upheld by Daulat Rao Sindhia, but the young prince was devoted to letters and religion, and on being assured of an annual income of Rs. 30,000, he gladly relinquished the royal title and retired to Vrindavan. Here he spent the remainder of his days in the practice of the most rigid austerities, till death overtook him at the age of 70, in 1848. For 27 years he had remained sitting cross-legged in one position, never moving from his seat but once a week when nature compelled him to withdraw. Five days before his death he predicted his coming end and solemnly bequeathed to the Seth the care of his old ser vants; one of whom, Lakshmi Narayan Byas, was manager of the temple estate, till his death in 1874.