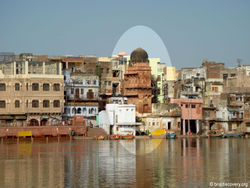 It is the oldest, though restored, standing relic of mediaeval period Mathura. Located near Asi-kunda Ghat of Yamuna, this is a slender, quadrangular tower of red sandstone commemorating the self-immolation of a faithful wife. She is said to have been the queen of Raja Biharimal of Amber. She was the mother of the famous Raja Bhagwan Das, by whom the monument was erected in the year 1570 AD. It has, as it now stands, a total height of 55 feet and is in four storeys; the lowest forms a solid basement, the second and third are lighted by square windows and are supplied with an internal staircase. The tower is raised on a high plinth, which probably was designed so as to catch the breeze and escape the dust and noise of the surroundings below. Its location in the midst of densely populated locality has made it more obscure. Previously it had a distinct presence due to its elevated position and open skyline from Yamuna side. This Rajput style tower is believed to be having a greater height; but all the upper part was destroyed by Aurangzeb. The plaster dome surmounting the building was apparently added about the beginning of the 19th century. At the time when it was built, it may be presumed that the city of Mathura occupied its old position in the neighbourhood of the Katra (Krishna Janmabhoomi), and that the river-bank was used as the ordinary place for the cremation of the dead. For quite some time it has faded into oblivion and neglect. It has become a favourite hangout for local cardplayers and chillum smokers.