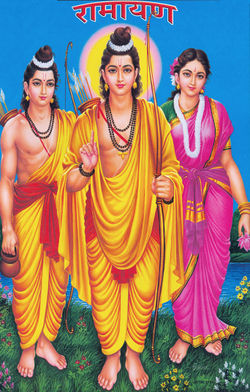 Sita was the daughter of Janak, king of Mithila, and wife of Ram. As she sprang from a furrow, she was known by name as Sita. Janak adopted her as his daughter. Sita became the wife of Ram, who won her by breaking the great bow of Shiv. She was his only wife, and was the embodiment of purity, tenderness, and conjugal affection. She accompanied her husband in his exile, but was abducted by Ravan and kept in the Ashok vatika at Lanka. Ravan made many efforts to win her to his will, but she did not give in to any persuasions, threats and terrors, and maintained a dignified serenity throughout. When Ram had slain Ravan and recovered his wife, he received her coldly, and refused to take her back, for it was hard to believe it possible that she had retained her honour. She established her purity by the ordeal of fire. The pile was raised and she entered the flames in the presence of gods and men, but she remained unhurt, and Agni, the god of fire himself brought her forth and placed her in her husband's arms. Notwithstanding this proof of her innocence, the people of Ayodhya blamed Ram for taking back a wife who had been in the house of another man. So, although she was pregnant, he banished her and sent her to the hermitage of Valmiki, where she gave birth to twin sons, Kush and Lav. There she lived till the boys were about fifteen years old. During the Ashvamedh sacrifice performed by Ram, he was reunited with Sita and their sons. Sita was asked to prove her purity once more. She publicly declared her innocence. But her heart was deeply wounded. She called upon her mother, the earth, to attest her purity, and it did so. The ground opened, and she was taken back into the source from which she had sprung. Ram was now disconsolate and resolved to quit this mortal life.