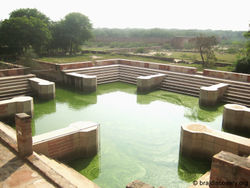 Uddhava-Kunda is situated exactly west of Kusuma-sarovara on the right side of the parikrama path. Vajranabha Maharaja manifested Uddhava-kunda under the guidance of Sandilya and other sages. Uddhavaji always resides nearby here as grass an shrubs in order to be sprinkled by the foot-dust of the gopis. The Srimad-Bhagavatam Mahatmya of the Skanda Purana gives a interesting description of this place.
After the disappearance of Krishna, His queens in Dvaraka were greatly afflicted by sorrow. Once, Vajranabha came here, with them and they loudly performed sankirtana. In that great sankirtana all the associates of Krishna started to appear one by one The associates of Dvaraka all sang and danced, and Arjuna began to dance and play mardanga. Suddenly, that exalted soul, Shri Uddhav emerged from the grass and shrubs, and he also became immersed in dancing in that maha-sankirtana. How could Krsna not come there? Finally, He also appeared in that maha-sankirtana-rasa, along with  Radhika ji and the other sakhis and, after some time disappeared again. In this way, Uddhava pacified the queens at this place.
Pilgrims performing parikrama of Shri Govardhana proceed along the parikrama path till they arrive at Shri Radha-kunda. The parikrama and pastime places in the vicinity of Shri Radha kunda have already been described in the chapter on Radha-kunda and Syama-kunda.