Holi is a festival of colors, it was meant to welcome the spring and win the blessings of Gods for good harvests and fertility of the land. Holi is regarded to be the opening festival of the Hindu calendar. It is celebrated at the end of the winter season on the last full moon day of the lunar month Phalguna (February/March), (Phalgun Purnima).The most famous Holi is played in Vrindavan-Mathura regions of the state of Uttar Pradesh.Lath Mar Holi in two towns namely Nandganv (where Lord Krishna grew up) and Barsana (where Shri Radha grew up), near Mathura, are considered (till today) as the epicenter of the Holi celebrations.
The main day, Holi, also known as Dhulheti, Dhulandi or Dhulendi, is celebrated by people throwing colored powder(gulal) and colored water at each other.Bonfires are lit the day before, also known as Holika Dahan (burning of Holika) or Chhoti Holi (little Holi).A special drink called thandai is prepared on holi.

Hiranyakshipu was the king of the asuras (demons) and he had been granted a boon by Brahma, made him almost impossible to be killed. He was not be killed during day time or night ,Inside a house or outside a house , Not on earth or in sky ,Neither by a man nor by an animal, Neither with an astra nor with a shastra. Despite this, Hiranyakshipu's own son, Prahlad, was a devotee of Lord Vishnu. In spite of several threats from Hiranyakshipu, Prahlad continued offering prayers to Lord Vishnu.Hiranyakshipu ordered his sister Holika, possessing the power to walk through fire unharmed, to kill Prahlad by sitting in the centre of a bonfire with Prahlad on her lap, so that the fire could devour him.But the brother and sister had forgot that Holika could only enter the fire alone or she would perish. Prahlada readily accepted his father's orders, and prayed to Vishnu to keep him safe. Holika with prahlad walked into a fire , however, Prahalad chanted the names of God and was saved from the fire and holika was perished.
Holi is thus celebrated to commemorate the death of the evil Holika, after whom the festival is named, and the new life granted to Prahlad for his devotion and faith.Thus,the religious significance of the festival of Holi is to mark the burning of self-conceit, selfishness, greed, lust and hatred.The victory of righteous forces over demoniacal forces.

`Udho! mohe Braj Bisarat nahi' (Udho! I just cannot forget Braj).
This was how Krishna expressed to his friend Uddhav, his love for Brajbhoomi–the land where he was born and grew up and which still reverberates with his presence. This is more so on Holi, a festival whose origins, as with so many other things in Braj, can be traced to the love story between Krishna and Radha. Local folklore has it that Krishna in one of his pranks, applied dark colour on the cheeks of Radha, since she was fairer than him. In the process, he started a tradition which has made the Holi of Brajbhoomi not only a spectacular and colourful one, but also a unique one. 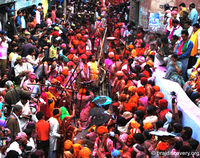 Incidentally in Brajbhoomi–the area which comprises modern day Mathura, Vrindavan, Nandgaon, Gokul, Barsana and other adjoining places, Holi is pronounced as Hori–a word which means joyous merriment. It is a meaning, which lends itself well in Krishna's land, where Holi celebrations are boisterous, fun-filled and spread over a two-week period.
The centre of action on the day of Holi is undoubtedly Barsana, the village where Radha was born. On the day of Holi, young men from Nandgaon go to Radha's village Barsana to play Holi with the women there. The women of Barsana welcome them with lathis. The objective of this Lathmaar Holi is that the men try and put a flag on Radha's temple in Barsana, while the women beat them with lathis to keep them away. By all accounts, the women take up their job enthusiastically giving many men a sound thrashing. Some men are also made to wear saris by the women and made to dance. However, all take it sportingly in the spirit of Holi. It is the intoxicating effect of Holi that a teasing duel of wits makes bosom buddies out of complete strangers within minutes. The dhoom of Holi continues in Braj through another unique event known a Daujee Ka Hurdanga, which is celebrated two days after the main Holi. This takes place at the temple of Krishna's elder brother–Balram, in the village of Baldeo, not far from Mathura and is again a boisterous and funfilled event in the vein of the Lathmaar Holi. Here men splash women with colours while women retaliate in more than equal measure, many times also tearing off the clothes of men. Another singular event during Holi takes place in Falen, a small village in Braj. The priest of the local temple here walks barefoot through the burning pyre to recreate Prahlad's original feat.
Finally, an inseparable part of celebrations during Holi in Brajbhoomi is a traditional dance known as Charkula. Since time immemorable the artists from a nearby village Mukhrai are performing this dance form. This is a visually enticing dance, in which a female dancer dances while balancing on her head, the Charkula–a tapered wooden column, which contains up to 108 lighted diyas. The dance is performed to the accompaniment of rasiya songs, describing the love of Radha and Krishna and to the rhythm of huge drums, locally known as bumb. This dance is an artistic expression of devotion (Bhakti Ras). When the atmosphere resounds with rasiya songs like Braj mein holi khelat Nandlala, one really cannot imagine being any where else on Holi except in the land of Krishna.