According to the Adi Varaha Purana, during the advent of Shri Ramachandra, monkeys and bears all brought large rocks and stones from many places to construct a bridge across the ocean. Hanuman also received the order from Shri Ramachandra to help build the bridge. Hanuman uprooted Govardhana from Uttaranchal, but while carrying him to the ocean he heard a divine sound that announced,
"The ocean bridge is now complete. No more rocks are required."
Hearing this, Hanuman became some sad and put down Shri Giriraja here, where he stands today. Giriraja also became unhappy and said to Hanuman,
"You have deprived me of the touch of Shri Rama's lotus feet. I will curse you."
"Please forgive me," Hanuman replied. "
In the next Dvapara yug, your desire will be fulfilled. At that time, the Supreme Lord Shri Krishna will stop the worship of Indra and worship you instead. Angered, Indra will try to destroy Braj by unleashing his thunderbolt and by sending torrential rains. At this time, Krishna will hold you on His hand to protect Braj. In this way He will fulfil your desire.
" Upon saying this, Hanuman leapt into the air and arrived at Shri Ramachandra side by the aerial pathways.
After narrating the whole incident to Him, Shri Ramachandra said,
"All the rocks that have been assembled to build the bridge have been delivered by the touch of My feet. But I shall fulfil the desires of Govardhana by holding him on My hand and touching him with My whole body. At the close of Dvapara-yug, I shall take birth in the dynasty of the Yadus and make Govardhana famous as the best servant of Hari by herding the cows with My sakhas on his slopes and by enjoying with My beloved gopis in his kunjas." 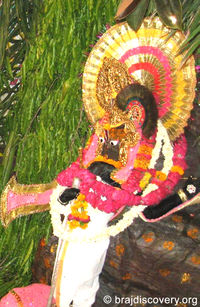 The Garga Samhita relates the following history of the appearance of Govardhana's in Braj in another age:Once, in the course of his wanderings, Pulastya Rishi reached Dronachala Hill. The son of Dronachala, Govardhana, was very beautiful, fragrant, smooth, and full of luxuriant, green trees and creepers. Pulastya Rishi desired to bring this Govardhana's to his place of residence, Kashi, because there was no such hill there on which he could peacefully perform his sadhana-bhajana. He asked Dronachala to give his son Govardhana to him for this purpose.Dronachala could not refuse, as he feared being cursed. Govardhana agreed to go, on the condition that if Pulastya put him down somewhere along the way, he would remain there and not move again. The sage accepted his condition, and by mystic power kept Govardhana on his palm as he proceeded to Kasi.
As they reached Braj, thoughts of Krishna's future pastimes entered Govardhana's mind. Govardhana became so heavy that the sage could no longer carry him and was forced to put him down right there. After the sage bathed, chanted his regular mantras, sung his prayers, ate and rested, he tried to lift Govardhana again, but remaining true to his word, Giriraja refused to move. With all his strength the sage tried to lift Govardhana, but could not do so. Finally, he angrily cursed Govardhana, saying, "You will diminish in size by one sesame seed daily." Govardhana happily accepted this curse, because he knew about the coming descent of the Supreme Lord Krishna. "Syamasundara will perform various pastimes on me, and I shall be blessed," he thought.
Giriraja does, in fact, diminish in size every day, but who can say whether this is due to the sage's curse or due to Giriraja's feelings of separation from Krishna? 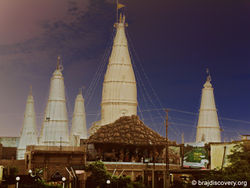 Ten miles further to the west is the famous place of Hindu pilgrimage, Gobardhan, i.e., according to the literal meaning of the Sanskrit compound, the nurse of cattle.' The town, which is of considerable size, with a population of 4,944, occupies a break in a narrow range of hill, which rises abruptly from the alluvial plain, and stretches in a south-easterly direction for a distance of some four or five miles, with an average elevation of about 100 feet.
This is the hill which Krishna is fabled to have held aloft on the tip of his finger for seven days and nights to cover the people of Braj from the storms poured down upon them by Indra when deprived of his wonted sacrifices. In pictorial representations it always appears as an isolated conical peak, which is as unlike the reality as possible. It is ordinarily styled by Hindus of the present day the Giri-raj, or royal hill, but in earlier literature is more frequently designated the Anna-kut. There is a firm belief in the neighbourhood that, as the waters of the Jamuna are yearly decreasing in body, so too the sacred hill is steadily diminishing in height; for in past times it was visible from Aring, a town four or five miles distant, whereas now a few hundred yards are sufficient to remove it from sight. It may be hoped that the marvellous fact reconciles the credulous pilgrim to the insignificant appearance presented by the object of his adoration. It is accounted so holy that not a particle of the stone is allowed to be taken for any building purpose; and even the road which crosses it at its lowest point, where only a few fragments of the rock crop up above the ground, had to be carried over them by a paved causeway.
The ridge attains its greatest elevation towards the south between the villages of Jatipura and Anyor. Here, on the submit, was an ancient temple founded in the year 1520 A. D., by the famous Vallabhacharya of Gokul, and dedicated to Sri-nath. In anticipation of one of Aurangzeb's raids, the image of the god was removed to Nathdwara in Udaipur territory, and has remained there ever since. The temple on the Giri-raj was thus allowed to fall into ruin, and the wide walled enclosure now exhibits only long lines of foundations and steep flights of steps, with a small, uutenanted, and quite modern shine. The plateau, however, commands a very extensive view of the neighbouring coun ty, both on the Mathura and the Bharatpur side, with the fort of Dig and the heights of Nand Ganw and Barsana in the distance. 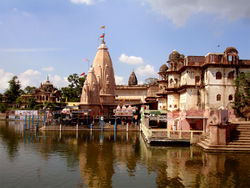 At the foot of the hill on one side is the little village of Jatipura with several temples, of which one, dedicated to Gokul-nath, though a very mean building in appearance, has considerable local celebrity. Its head is the Gosain of the temple with the same title at Gokul, and it is the annual scene of two religious solemnities, both celebrated on the day after the Dip-dan at Gobardhan. The first is the adoration of the sacred hill, called the Giri-raj Puja, and the second the Anna Kut, or commemoration of Krishna's sacrifice. They are always accompanied by the renewal of a long-standing dispute be tween the priests of the two rival temples of Sri-nath and Gokul-nath, the one of whom supplies the god, the other his shrine. The image of Gokul-nath, the traditional object of veneration, is brought over for the occasion from Gokul, and throughout the festival is kept in the Gokul-nath temple on the hill, except for a few hours on the morning after the Diwali, when it is exposed for worship on a separate pavilion. This building is the property of Giridhari Ji, the Sri-nath Gosain, who invariably protests against the intrusion. Party-feeling runs so high that it is generally found desirable a little before the anniversary to take heavy security from the principals on either side that there shall be no breach of the peace. The relationship between the Gosains is explained by the following table:—

Immediately opposite Jatipura, and only parted from it by the intervening range, is the village of Anyor—literally ‘the other side’—with the temple of Sri-nath on the summit between them. A little distance beyond both is the village of Puchhri, which, as the name denotes, is considered the ' extreme limit' of the Giri-raj.
Kartik, the month in which most of Krishna's exploits are believed to have been performed, is the favorite time for the pari-krama, or ‘perambulation’ of the sacred hill. The dusty circular road which winds around its base has a length of seven kos, that is, about twelve miles, and is frequently measured by devotees who at every step prostrate themselves at full length. When flat on the ground, they mark a line in the sand as far as their hands can reach, then rising they prostrate themselves again from the line so marked, and continue in the same style till the whole weary circuit has been accomplished. This ceremony, called Dandavati pari-krama, occupies from a week to a fortnight, and is generally performed for wealthy sinners vicariously by the Brahmans of the place, who receive from Rs. 50 to Rs. 100 for their trouble and transfer all the merit of the act to their employers. The ceremony has been performed with a hundred and eight.prostrations at each step (that being the number of Radha's names and of the beads in a Vaishnava rosary), it then occupied some two years, and was remunerated by a donation of Rs. 1,000.

About the centre of the range stands the town of Gobardhan on the margin of a very large irregularly shaped masonry tank, called the Manasi Ganga, supposed to have been called into existence by the mere action of the divine will (manasa). At one end the boundary is formed by the jutting crags of the holy hill; on all other sides the water is approached by long flights of stone steps. It has frequently been repaired at great cost by the Rajas of Bharat-pur; but is said to have been originally constructed in its present form by Raja Maan Singh of Jaipur, whose father built the adjoining Haridev Temple. There is also at Banaras a tank constructed by Man Singh, called Man Sarovar, and by it a temple dedicated to Mansarovar: facts which suggest a suspicion that the name ‘Manasi’ is of much less antiquity than is popularly believed. Unfortunately, there is neither a natural spring, nor any constant artificial supply of water, and for half the year the tank is always dry. But ordinarily at the annual illumination, or Dip-dan, which occurs soon after the close of the rains, during the festival of the Diwali, a fine broad sheet of water reflects the light of the innumerable lamps, which are ranged tier above tier along the ghats and adjacent buildings, by the hundred thousand pilgrims with whom the town is then crowded.