The Temple of Govind Deo is not only the finest of this particular series (Gobind Dev, Gopi Nath, Jugal Kishor and Madan Mohan.), but is the most impressive religions edifice that Hindu art has ever produced, at least in Upper India. The body of the building is in the form of a Greek cross, the nave being a hundred feet in length and the breadth across the transepts the same. 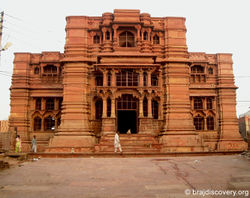 Indian historions are not in agreement with Mr. Growse's view that Govind Deo Temple's building is in the form of a 'Greek cross' or 'constructed of true radiating arches as in our Gothic cathedrals. The central compartment is surmounted by a dome of singularly graceful proportions; and the four arms of the cross are roofed by a waggon vault of pointed form, not, as is usual in Hindu architecture, composed of overlapping brackets, but constructed of true radiating arches as in our Gothic cathedrals. The walls have an average thickness of ten feet and are pierced in two stages, the upper stage being a regular triforium, to which access is obtained by an internal staircase, as in the somewhat later temple of Radha Ballabh. This triforium is a reproduction of Muhammadan design, while the work both above and below it is purely Hindu. It should be noted, however, that the arches are decorative only, not constructural : the spandrels in the head might be, and, in fact, for the most part had been—struck out, leaving only the lintel supported on the straight jambs, without any injury to the stability of the building. They have been re-inserted in the course of the recent restoration. At the east entrance of the nave there is a small narthex fifteen feet deep; and at the west end, between two niches and encased in a rich canopy of sculpture, a square-headed doorway leads into the choir, a chamber some twenty feet by twenty. Beyond this was the sacrarium flanked on either side by a lateral chapel; each of these three cells being of the same dimensions as the choir, and like it vaulted by a lofty dome. The latter building has greatly the advantage in size, but in the other, the central dome is more elegant, while the richer decoration of the wall surface and the natural glow of the red sandstone supply that relief and warmth of colouring which are so lamentably deficient in its western rival. The ground-plan is so similar to that of many European churches as to suggest the idea that the architect was assisted by the Jesuit missionaries, who were people of considerable influence at Akbar's court : was this really the case, the temple would be one of the most eclectic buildings in the world, having a Christian ground-plan, a Hindu elevation, and a roof of modified Saracenic character. But the surmise, though a curious one, must not be too closely pressed; for some of the temples at Khajurao, by Mahoba, are of similar design and of much earlier date; nor is it very likely that the Jesuits would have interested themselves in the construction of a heathen fane. It would seem that, according to the original design, there would have been five towers; one over the central dome, and the other four covering respectively the choir, sacrarium, and two chapels. The sacrarium has been utterly razed to the ground the chapel towers were never completed, and that over the choir, though the most perfect, has still lost several of its upper stages. This last was of slighter elevation than the others, occupying the same relative position as the spirelet over the Sanctus bell in western ecclesiology. The loss of the towers and of the lofty arcaded parapet that surmounted the walls has terribly marred the effect of the exterior and given it a heavy stunted appearance; while, as a further disfigurement, a plain masonry wall had been run along the top of the centre dome. It is generally believed that this was built by Aurangzeb for the purpose of desecrating the temple, though it is also said to have been put up by the Hindus themselves to assist in some grand illumination. It either case it was an ugly modern excrescence, and its removal was the very first step taken at the commencement of the recent repairs. Under one of the niches at the west end of the nave is a tablet with a long Sanskrit inscription. This has unfortunately been too much mutilated to allow of transcription, but so much of it as can be deciphered records the fact that the temple was built in sambat 1647, i.e., A.D. 1590, under the direction of the two Gurus, Rupa and Sanatana. As it was in verse, it probably com bined a minimum of information with an excess of verbosity, and its loss is not greatly to be regretted. The following is taken from the exterior of the north-west chapel, where it is cut into the wall some ten feet from the ground, and is of considerable interest :— 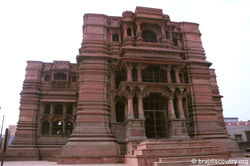 It was looked upon by the people in the neighbourhood convenient quarry, where every house-builder was at liberty to excavate for materials; while large trees had been allowed to grow up in the fissures of the walls, and in the course of a few more summers their spreading roots would have caused irreparable damage. Accordingly, after an ineffectual attempt to enlist the sympathies of the Archaeological Department, the writer took the op portunity of Sir William Muir's presence in the district, on tour, to solicit the adoption on the part of the Government of some means for averting a catastrophe that every student of architecture throughout the world would have regarded as a national disgrace. Unfortunately he declined to sanction any grant from Pro vincial funds, but allowed a representation of the ruinous condition of the temple and its special interest to be made to the Government of India, for communica tion to the Maharaja of Jaypur, as the representative of the founder. .His Highness immediately recognized the claim that the building had upon him and made no difficulty about supplying tho small sum of Rs. 5,000, which had been estimated by the Superintending Engineer as sufficient to defray the cost of all absolutely essential repairs. The work was taken in hand at the beginning of August, 1873. The obtrusive wall erected by the Muhammadans on the top of the dome was demolished; the interior cleared of several unsightly party-walls and other modern excrescences; and outside, all the debris was removed, which had accumulated round the base of the building to the astonishing height of eight feet and in some places even more, entirely concealing the handsomely moulded plinth; a considerable increase was thus made to the elevation of the building the one point in which, since the loss of the original parapet and towers, the design had appeared defective. On the south side of the choir stood a large domed and pillared chhattri of very handsome and harmonious design, though erected 40 years later than the temple. The following inscription is rudely cut on one of its four pillars :-

"In the year Sambat 1693 (i.e., 1836 A.D.), on an auspicious day, Kartik Badi 5, in the reign of the Emperor Shahjahan, this monument was erected by Rani Rambhavati, widow of Raja Bhim, the son of Rana Amar Singh. "
These works had more than exhausted the petty sum of Rs. 5,000, which (as remarked at the time) was barely enough to pay for the scaffolding required for a complete restoration; but in the meantime Sir John Strachey had succeeded to the Government of these Provinces, and he speedily showed his interest in the matter by making a liberal grant from public funds. With this the roof of the entire building was thoroughly repaired; the whole of the upper part of the east front, which was in a most perilous state, was taken down and rebuilt; and the pillars, brackets, and eaves of the external arcades on the north and south sides, together with the porches at the four corners of the central dome, were all renewed. 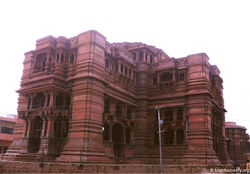