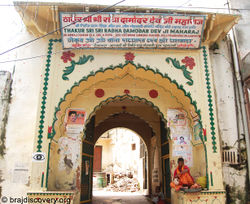 This temple is situated within the area of Sevakunj in Vrindavan. Shri Rup Goswami used to live here in his bhajana-kuti. The contemporary Goswamis and devotees assembled here for istagosthis and, in those gatherings of Vaishnavas, Shri Raghunath Bhatt would elucidate on Shrimad Bhagvat in his melodious voice. Shri Rup Goswami compiled Shri Bhakti Rasamrita Sindhu, Ujjval Nilamani and other sacred texts on bhakti at this place. The young Shri Jiv Goswami was engaged in all kinds of service to Shri Rup Goswami, who personally manifested the deity of Shri Radha-Damodar with his own hands and offered the service and worship to Shri Jiv. According to the book Seva Prakatya, Shri Radha Damodar were installed in samvat 1599 (1543 AD) in the month of Magha (January–February) on Shukl Dashami (the tenth day of the bright half of the month). The original Shri Radha-Damodar are now in Jaipur, and Their Pratibhu Vigrahas, which are as potent as the original deities, are in Vrindavan.

On the altar with Them are Shri Vrindavan-chandra, Shri Chhaila chikaniya, Shri Radha-Madhav and a few others. The samadhis of Shri Jiv Goswami and shri Krishnadas Kaviraja Goswami lie behind the temple, and in the northern area of the temple are the samadhi and bhajana-kuti of Shri Rup Goswami. Adjacent to this is the samadhi of Shri Bugarbha Goswami.

Sanatan Goswami used to perform parikrama of Govardhan daily. In his old age, when he became incapable of performing parikrama, Krishna came to him as a boy and gave him a govardhan shila, which was one-and-a-half cubits long and shaped like a banyan leaf. He instructed Sanatan Goswami to perform parikrama of this shila instead. On this shila are imprints of Krishna's foot, His flute and a cow's hoof. Sanatan Goswami brought that shila to Vrindavan and would circumambulate it daily. After his disappearance, Shri Jiv Goswami installed the shila in the temple of Shri Radha-Damodar and began to worship it. Darshan of this shila is available on special request.